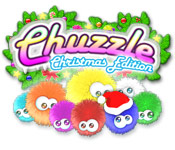 Meet the Chuzzles - the adorable stars of this slide and match puzzle experience! They are googly-eyed balls of fur that giggle, squeak, and sneeze as you slide columns and rows to set off combos and chain reactions of ridiculous intensity. Free them by forming groups of three, but watch out for dangerous puzzle locks! Explore 4 different game modes as you earn trophies, unlock secret games and more! Once you start popping Chuzzles you might not be able to stop!