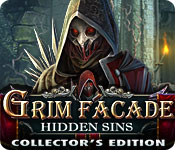 Big Fish Editor's Choice! This title was chosen for its high standard of quality and amazingly positive reviews from our Game Club beta testers. From ERS games comes the HOPA classic Grim Façade with another exciting case to solve! A masked vigilante calling himself the Avenger has the town of Coldstone in a death grip of fear, and you’re called in by the mayor to investigate. His wife’s been kidnapped, and there’s a blacklist of potential targets for the Avenger’s wrath. Can you stop him before he strikes again, or will you be crossing another name off the list? Special Achievements, a humorous alley cat, and hidden masks you can collect throughout the game make this one a winner! See what our Beta testers had to say: “ERS did it again....Graphics were not only done well also interactive. The storyline did not disappoint, I love this series and will be purchasing this one as well.” - Samantha, Beta Tester “I love this series and this developer. Once again they have made an amazing game.” - Rodger, Beta Tester