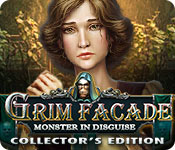 Big Fish Editor's Choice! This title was chosen for its high standard of quality and amazingly positive reviews from our Game Club beta testers. ERS Game Studios proudly presents the next installment of the Grim Facade series! A recent string of murders has been terrifying locals. The authorities thought they caught the real Bloody Stanley, but some new murders have them stumped. Could it be a copycat killer, or is the masked murderer still out there? It's up to you to solve the case. Will you find the killer before it's too late, or will you be the next victim? Find out in this chilling hidden-object puzzle adventure! See what our Beta testers had to say: "The graphics are fantastic, the puzzles are very imaginative, even the hops show great originality. I cannot wait to play the entire game." - Charlise, Beta Tester "A great addition to this terrific series. Darker than the others, but a definite buy for me. LOVE the artwork. Thanks for the graphic warning. This game drew me in from the beginning." - Ben, Beta Tester